The future of WARO 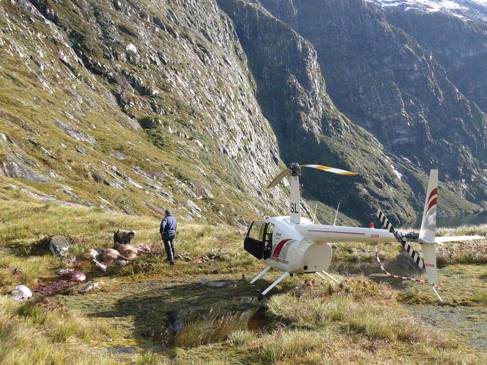 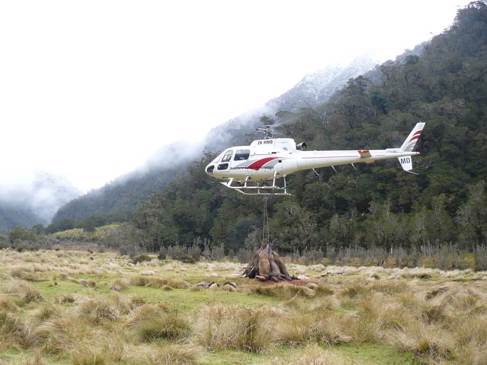 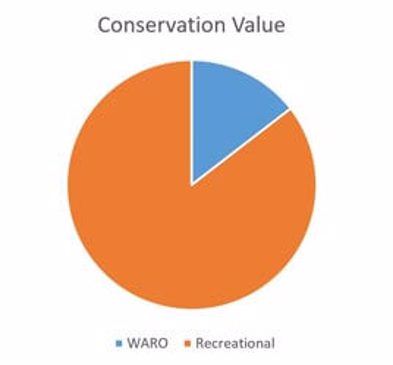 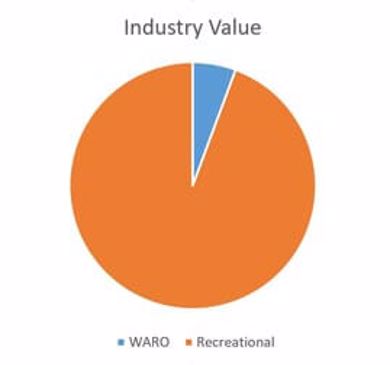 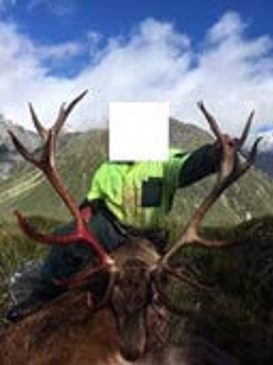 If you’ve spent any time in the last month or so in the Southern Alps and particularly West Coast Red deer country, you could be forgiven for thinking we’re back in the eighties. Since the rise in the wild venison price last summer, WARO (wild animal recovery operations) have been on the rise.

Since they started up again in earnest in late January 2017 the choppers have progressively been making serious in-roads into a lot of our premier trophy Red deer herds, to the extent that large tracts of wilderness country are now holding very low deer numbers and in particular stags – as they were in the eighties. The deer population in most of these areas was low anyway, but what was there was a good cross section, age and sex-wise. There were some really nice trophy stags with a bit of age on them starting to appear over the last few years.

The machines have had a much greater effect than even the operators expected in some of these areas because there had been no significant WARO for a number of years, meaning that there was a whole generation of deer that didn’t know what a WARO chopper was. These animals did not run the minute they heard a helicopter, conversely they have largely stood around as they and their mates have been shot. This generation of deer have been mostly living in the open, where the better feed is. Rather than being spread over a much wider area of open country, now any survivors have been forced back into the bush where their negative effects will be more concentrated. Out in the open they were way more accessible to the recreational hunter, but now this extremely low population of almost nocturnal deer is again becoming largely un-huntable.

The mature trophy stags which draw the recreational hunter to these back country areas have mostly disappeared, and even if prices dropped and WARO stopped tomorrow (which it certainly isn’t looking like doing) it will be another six or more years before we start to see any stags with enough age on them again. As I said earlier, we are fast heading back to the dark days of the eighties and nineties for recreational hunting, where no deer were seen in the open during daylight hours, and it was really hard work to even shoot a deer for meat, let alone find a trophy stag. A lot of today’s new hunters have no idea just how bad it was back then, and even a lot of those hunters old enough to remember seem to have forgotten with the more enjoyable times of the last 15 years. Make no mistake, if something doesn’t change in the very near future there are going to be a lot of very disappointed hunters in some (particularly South Island) areas this roar and this is going to get a lot worse in the future. Right now there are some areas particularly in the North Island that aren’t getting much WARO attention, but if the price stays high, they will start hunting further afield, including all the farm/station country. This will be compounded with the increasing areas that are off limits to them due to 1080 drops – both DoC’s Battle for the Birds and TB Free/pest free NZ. In the eighties helicopter poaching was rife on private land, and no deer was safe, no matter where it was. The genuine operators will stick to the rules, but with DoC happy to give a WARO concession to anyone who asks for one, the ratbags will come out of the woodwork again for sure.

Right now, the anti-deer people are rubbing their hands together with glee, but what the anti-deer brigade forget is that for all the years that WARO has been largely inactive, recreational hunters have still been keeping Red deer numbers under control in most areas. We have had a large increase in recreational hunters over the last 15 years, and treated fairly, they will continue to provide a huge conservation benefit to New Zealand into the future. So let’s look at a few of the facts and figures relating to recreational hunting and WARO. Just how big are these respective industries? Now we are talking orders of magnitude here, not down to the last dollar. We are just trying to establish approximately where WARO and recreational hunting sit in relation to each other.

Starting with WARO, what is relative turnover/economic value for an average season?

One way of estimating what the WARO industry is worth is to start with the total farm and feral venison export value – excluding velvet. For the year ending September 2017, it was $206 million. The total deer kill for that year was 300,000 animals. The average value for each carcase was $690 as it left New Zealand. We know the price for wild venison on a direct comparison (ie skin off) is at maximum 80% of their farmed cousins ( often more like 60 or 70%), so about $550 maximum average per carcase. The WARO wild deer kill has been between 10,000 and 30,000 in the years it’s been operating, and the last harvest peak was 28,000 when prices hit the last high, so if we use an average of 19,000 (and this is to many to be sustainable long term) then this gives us an industry turnover/value of around $10.5 million. Recent estimates bandied around of about 12 million suggest we’re in the ballpark.

Value of WARO to conservation/biodiversity

The value of WARO to conservation is the cost to replace the deer kill. If you used a Robby (R22 helicopter) to just do aerial S&D (search and destroy) then a reasonable cost over the country would be $100 per animal (more like $150 if using an R44), therefore the cost to replace WARO is about $1.9 million. Last estimate on this was around $1.5 million so again, we are in the ballpark.

Value of recreational hunting to New Zealand and to conservation

Professor Geoff Kerr of Lincoln University, who has done the most recent studies on recreational hunting, estimates there are probably about 50,000 game animal hunters who kill in the order of 150,000 Red deer a year (not all on DoC land by any means). The NZ Journal of Zoology paper provides conservative estimates of 30,000 hunters (we know this is too low; DoC now issues permits to 34,000 different hunters each year, and with a large proportion still not getting permits, 50,000 is quite conservative) killing about 135,000 deer and 132,000 other big game animals. These hunters spent about $3500 per year each on hunting, excluding vehicles.

If hunters were prepared to pay another $50 on top of the $3500 they currently spend, this would generate $2.5 million and easily replace WARO’s $1.5-2 million conservation benefit. In fact, the benefit of doing S&D is significantly higher than WARO as you can target hinds – the breeding unit – significantly reducing the number of animals needing to be shot to achieve the same conservation benefit. WARO as it operates currently has the opposite effect, being heavily stag-biased as they are worth the most to the operator. In fact, unless the venison price is quite high, a lot of WARO operators won’t even shoot the hinds and yearlings. This puts them in even greater conflict with the recreational hunters, who highly value the mature stags. The loss of the turnover/value of wild venison to the country is inconsequential as this would be easily made up by the turnover value generated by the increase in recreational hunting due to not having to compete with the current WARO, and the turnover of the S&D culling operations. Recreational hunting would only need to increase by 5% to account for even the complete loss of WARO’s turnover, and there would still be some wild venison exported in the high venison price years anyway when it is economic to recover them.

It could be managed in the same way it is in the Fiordland Wapiti area where the Fiordland Wapiti Foundation, working in with the local DoC people, maintains a consistent level of control in both high and low venison price years. They have a range of trusted helicopter operators who know they have the guaranteed work, and if they leave a trophy bull they know some other ratbag operator isn’t going to fly round the corner and shoot it anyway. This stops the “If I don’t shoot it, someone else will” mentality that drives a lot of the reasons given for the current WARO guys shooting all the big stags. Bio diversity wise when deer populations get high, hinds are the issue. They have small home ranges and have far more concentrated browsing. The stags spread far and wide, and do not intensively browse any area.

With managed control, recreational hunting interests are protected, genuine helicopter operators have certainty, exports benefit and additional money goes into conservation gains. In high venison price years when its economic to recover the animals the revenue subsidises the control, in low price years the recreational hunters’ money funds the control – making the money go a lot further for deer population management. The final proof in the pudding is the fact that since managed WARO/deer control was put into place, the support and therefore revenue from recreational hunters in Fiordland has increased many-fold, rather than the open slather that used to exist there and still does over the rest of the country. And both the Wapiti herd trophy potential and the biodiversity values are improving.

This really is a no-brainer – and a win, win for everybody – for recreational hunters, conservation, and for the provision of regular, guaranteed work for genuine helicopter operators.

Most of you will be aware, that DoC promised a WARO review, and they have recently reneged on it despite promises made in court, and are about to issue new open slather long term WARO permits. On past history, any review run by DoC would have only paid lip service to recreational hunting anyway.

Since DoC has reneged, the GAC (Game Animal Council) has announced it is going to run a WARO review itself, as it is their statutory responsibility to do. (Under their statute they have to: liaise with hunters, hunting organisations, representatives of tangata whenua, local authorities, landowners, the New Zealand Conservation Authority, conservation boards, and the Department of Conservation to improve hunting opportunities). This will be inclusive, getting everyone together round the same table - not the old divide and conquer DoC way where they deal with everyone individually, and completely manage the flow of information to and from parties to suit their own ends.

Now more than ever, recreational hunters need to get together and support our only means of effecting any change in the way WARO is managed, and that is the GAC.

If we all pull together and fund it properly, through something like a fee, a licence or whatever you want to call it, the GAC has the legislative backing to make stuff happen. Recreational hunters need to unite, come of age, and mount a campaign to properly fund the GAC.